I had my sign up and bowls of candy by the door, but no one came.

Many people still don’t have power, hopefully they’ve found a warmer place to stay. As I drive through town I see green, yellow and orange leaves dancing in the sunlight and drifting down to snow covered ground. Have fun raking that, I think to myself. Hugh tree branches have split off old trees and lay across the road, often power lines with them. In some places traffic lights are out.

It was not a cold day really, as a matter of fact, a lot of melting was going on. Where did all the children go? Perhaps they were somewhere playing in the snow. Night began to fall and I expected to see at least a few brave ghosts or goblins of some sort. They never came and then my husband said, “I think they cancelled Halloween”.

Mother’s will be giving their children all the candy they had planned to give away. Costumes will be put in storage for another year, and life goes on not quite as usual, but with an eerie question in our minds, “What will happen next?” Snow on Halloween, and Halloween is cancelled; who’s trick was that? 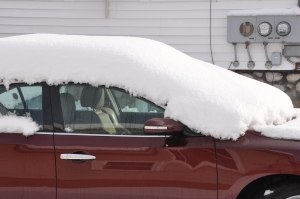